+Luka Rejec asked me to "stat up the noble steed" he drew for his Dworfs of Anarchy, so I did (for the DCC RPG):

Dworfen Kaosmobile: Init as driver; Atk hit and run +2+INT modifier of driver (1d6 per 10' distance of acceleration (up to 10d6), every damage die showing a 6 results in a broken bone and losing a point of Strength or Agility); AC 18 (every passenger receives +2 to AC); HD 3d8+14 (any magical fire attack that does at least 8 damage to the Kaosmobile will make it explode, doing 2d6+8 damage to every passenger); MV 100’ (turning takes 1 round); Act n/a; SP breachcruisin'; SV Fort +8, Ref as driver, Will n/a; AL C. 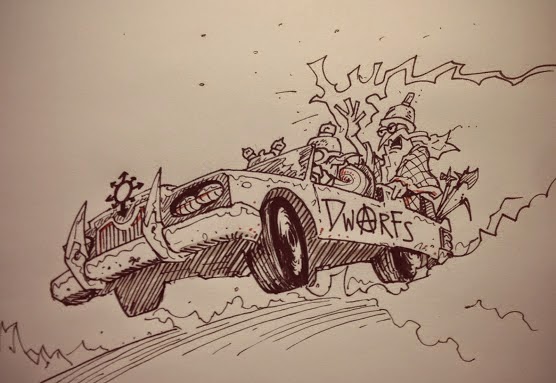 "The Dworfs shall ride once more into the breach. For Kaos and Light." - illustration by Luka Rejec﻿

As requested by +Joel Priddy and inspired by +Courtney Campbell's On a Magical Shield, here are some more magic shields.


This iron shield has a protrusion with a coiled wire around it. When activated by pressing a button on the handle, it creates a humming sound. Any attack with a metal weapon that misses to hit by one or two points results in the weapon clinging to the shield, requiring a complete action and successful strength check to free the weapon. Any attack on a fighter that is holding onto a weapon currently clinging to Magnetus receives a +1 to hit.


When not in use, it looks like a pitch-black glove that does not reflect any light. When activated by clenching one's empty hand, a disk of magic shadow forms instantly at the back of the hand, protecting the wearer like a normal shield.

This glove is a given as a reward for extraordinary services to priests and champions of Ith-Narmant, the master of shadows, chill and solanaceae. Prolonged use by others might result in the visit of Ith-Narmant's agents.


A round shield covered in the dark blue pelt of a magical beast. The wielder of the shield appears to be one foot away from their actual location. In addition to the AC bonus of a normal shield, the displacement effect gives any attacker a -1 on their attack rolls.

Any other action that involves the need to know the location of the shield's wielder, like a cleric's healing touch or chucking a weapon to the displaced fighter, also either requires a successful perception roll at -1 or incurs a -1 on the roll for the action, as applicable.


As displacer shield, but combining pelts from two magical beasts, displacing the wielder two feet and resulting in -2 on all applicable rolls.


Not a shield per se, this symbiotic magical bug can be implanted in the back of one's hand or forearm. In its dormant state, it looks like a big grey wart. When the host loses hit points, the wart quickly grows into a buckler sized shell and sprouts up to 4 chitinous tentacles that actively deflect further attacks.

The AC bonus is equal to the lost hit points, up to a maximum of +4. Each attack that does not hit the host reduces this AC bonus by 1. Further hit point loss increases it again (up to +4). Any healing of hit points also reduces the bonus AC.

The arm hosting a paineater bug cannot be used to wield a weapon or sword. Extracting the bug is only possible by cutting it out of the flesh, resulting in 4 damage.

Sometimes called Batbane Women or simply Bat Women, some claim that these chimeras are the offspring of a single woman or group of women that were once human, but struck by a terrible curse for an evil deed they committed. Others suspect that they are the unfortunate results of forbidden experiments with devilish wizardry.

Batbane Women look like a hideous crossbreed of a human female and a bat. Most of their once human features are hidden under monstrous deformities. Leathery batwings stretch from the legs to their elongated arms, with hands and feet ending in long claws. Their mouths are full of sharp teeth and their ears are big and pointy. They are partially covered in a silky black fur, but have patches of bare skin. The hairless spots differ in size and position from one Batbane to the next, with the exposed skin often showing a sickly and pale appearance. Their faces are usually but not always hairless.

The Batbanes are capable of flying for short periods of time, and prefer to attack their prey with dives from above. They can use the claws on their feet to grab and carry away their victims, if those are not much heavier than themselves. Due to their ability to produce and perceive ultrasonic sounds, they can maneuver in absolute darkness and are almost impossible to surprise. Their instincts and behavior are very feral and although they can subsist purely on drinking blood, they tend to also rip apart and eat some of the flesh of their prey in the process of feeding. They get their main sustenance from wild animals, but prefer the more potent humanoid blood when the opportunity presents itself. They eschew the sun, sleep through the day in dark places and only come out to hunt at night.

The curse of the Bat Women is lifted during two nights per year, on the summer and winter solstice. In these nights, their bodies and minds transform back to their human origins, and they are driven to seek the companionship of other human beings. Though still feral in nature, they regain some intelligence and a rudimentary ability to speak. Some Batbanes even grow attached to certain individuals they meet during these nights and try to revisit them again at a later solstice. Usually, their new friends are totally oblivious to the Batbane's true nature. Although a Batbane in human form is generally in a friendly and social mood, they can still get very dangerous if they feel threatened. In very rare cases, when pushed too far, they may even transform back to their inhuman form before the night is over, with dire consequences for anyone nearby.

Some whisper that if a benevolent soul could unravel the original cause for their curse and redeem it, all of them would be saved from their fate, and could live free from the curse or at least die in peace.﻿

What the cyclops reads